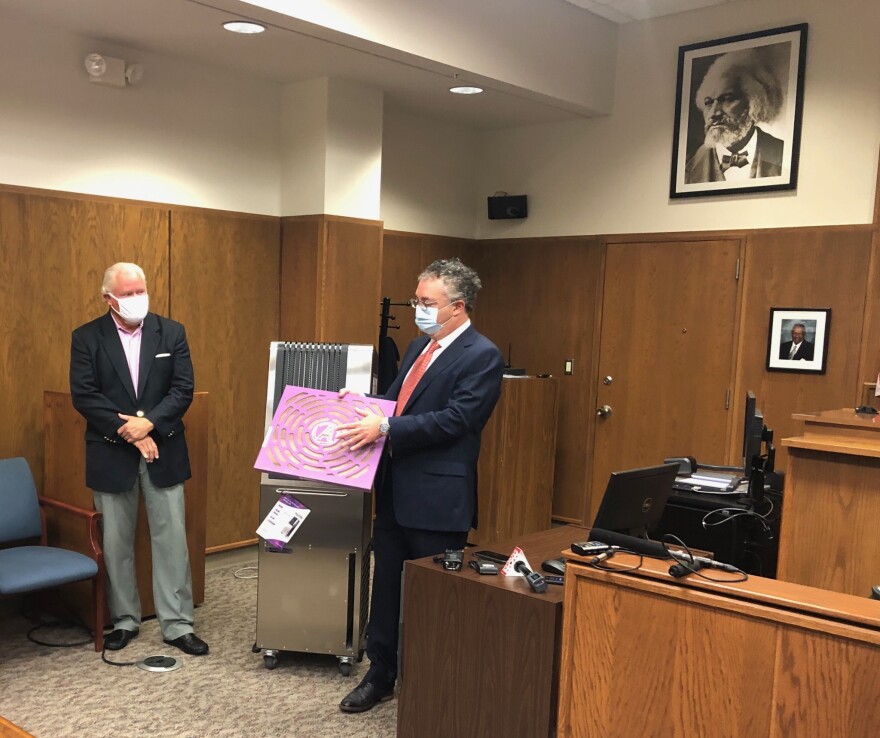 Ultraviolet air cleaning systems are right now being used in the Montgomery County Common Pleas Court. This as some judges prepare to host their first jury trials since the COVID-19 pandemic began.

About 100 of the Aerobiotix machines are operating in hospitals across the state. President and CEO of Aerobiotix Dr. David Kirschman says this includes local Premier Health hospitals.

"When we tested this thing against test virus’ basically any virus that entered that chamber did not survive the trip," Dr. Kirschman said. "So air comes in, it goes through a prefiltration process then there’s an ultraviolet lamp on the inside."

Aerobiotix is a medical device company in Miamisburg, producing these air cleaning systems for clients across the world. The company says Montgomery County Common Pleas is now the first court in the United States to acquire these systems.

"We care about the safety of our staff, our employees, most importantly about the people that come before us," Judge Steven Dankof said.

"This technology is going to allow us to move forward in a much safer fashion. I think prospective jurors should feel good about that," Judge Dankof said.

"We have heard a lot of interest from schools, as a matter of fact, we’re putting a number of these systems actually tomorrow down at Miami Valley School," Dr. Kirschman said.

Elizabeth Cleary, the Head of School at the Miami Valley School released the following statement about the systems:

"Out of the generosity of an MVS parent, we have been fortunate enough to receive these machines as a donation. 56 units will be installed in classrooms and 10 in common spaces. Although we know that these units will not make our school virus-free, we feel they add another layer of protection for our community for in-person learning."

Dr. Kirschman says as more schools and businesses return to meeting in-person, they expect the demand to increase. He says either later this year or the beginning of next they will be unveiling a system controlled by WIFI and an iPad.

Welcoming your Employees Back to the Office, Safely

Good ventilation reduces the risk of COVID-19 transmission. So what’s being done to improve the air kids breathe?